However, he introduced them to his friend Dr. Juuko who has land at the bank of River Nile. Bhante together with the Russian Buddhists travelled to Jinja to see the site if the future stupa. The group also included Dr. Aung from Myanmar who had just come to visit the Uganda Buddhist Centre.

The spot was determined and Dr. Juuko also offered space for constructing a future meditation centre in Jinja. 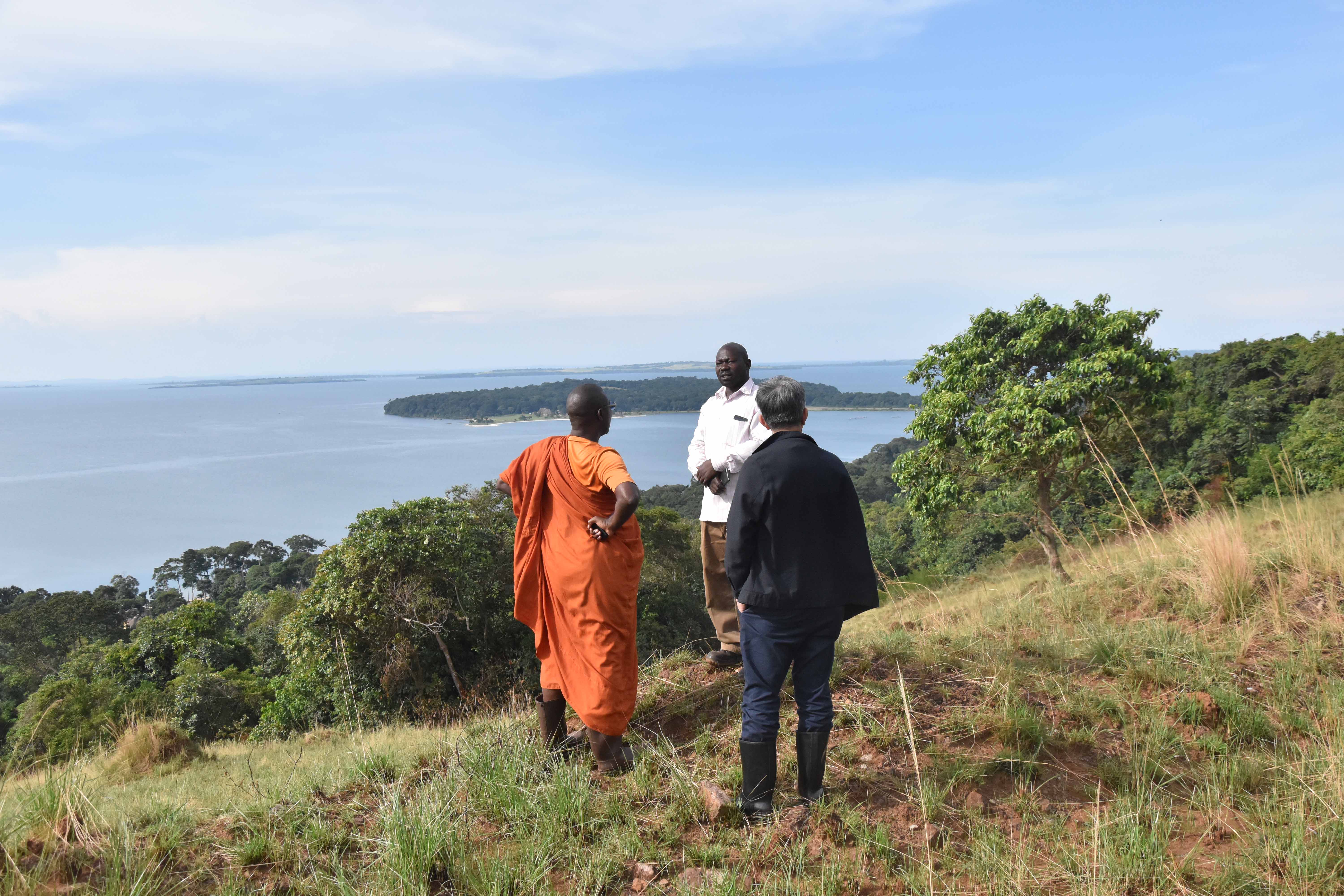 Currently the Uganda Buddhist Centre is in process of buying two acres of land adjacent to the Centre. This land will make it possible to construct buildings for monastics, housing complex for laities, kitchen and administrative block. We have started fencing the land.

Furthermore, the Uganda Buddhist Centre is planning to secure land for a forest monastery at Ssesse Islands in Kalangala district located within Lake Victoria. The size of the land is 20 acres. Each acre of land is costing 13,500 US dollars. So far, Uganda Buddhist Centre can afford to secure only two acres of land. We are yet to get funding to purchase the rest of the 18 acres. 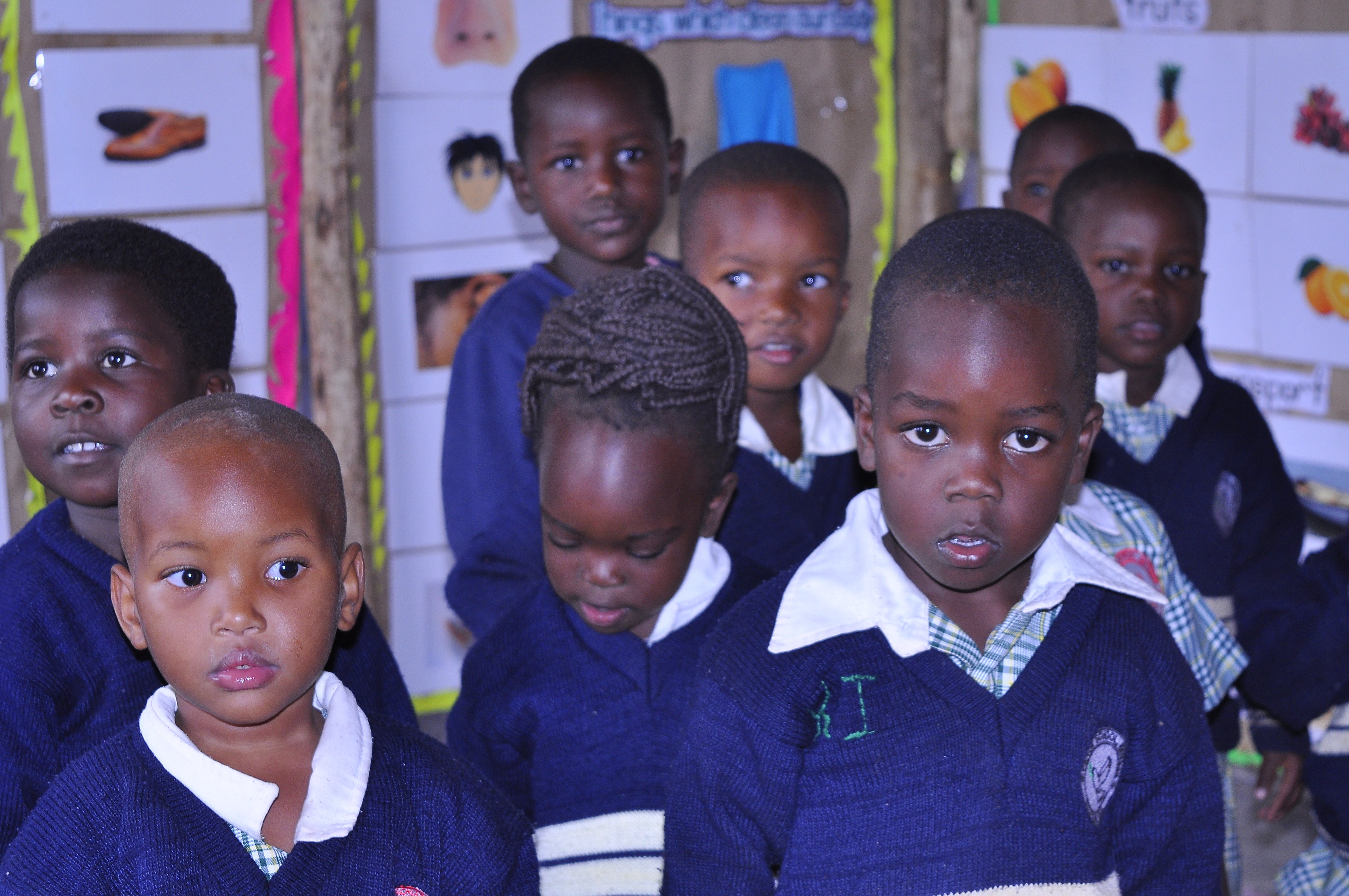 We have committed our hearts to quality and holistic education, and the safety of our children and teachers is paramount. As students go for a holiday, we are currently fencing the school to guarantee safety of our children and school premises. The fencing will also add extra security to the school and allow the grass and trees to grow which are always destroyed by the wandering children who come to collect water at the nearby borehole. 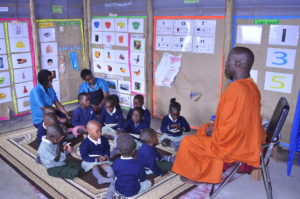 Towards the end of April, the school was honored to host Most Ven. Bhante Buddharakkhita. Children were happy to see him and humbly greeted him. Bhante was happy about the progress of the children and the school. He offered one of his finest carpets to the school on which children sit to do their daily class activities. Bhante also offered chocolates, and led the children into meditation as he prayed for their safety and peace.

The Peace school Children will report back to school on 27th for their second term of the year. We are so excited for the second term of the calendar year and we are positive that it will be filled with much joy from the warm hearts of our little angels.

If you would like to support our school as a volunteer, or make a donation to our school or offer gifts to our children, please follow the link (https://xpresspay.ug/payments/ugandabuddhistcentre/index.html) or contact us any time via ugandabuddhistcentre@gmail.com. We look forward to welcoming you on board. 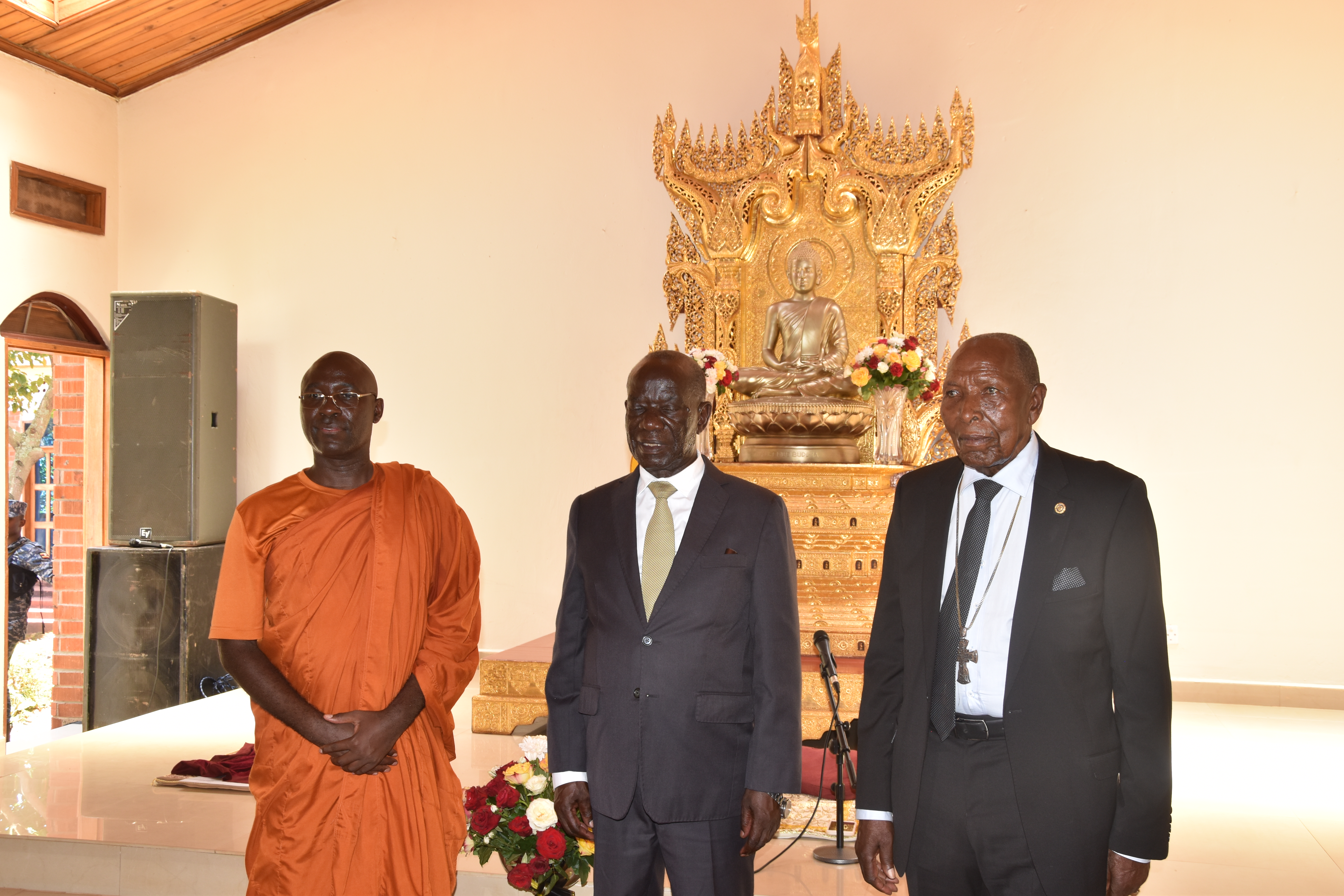 The Uganda Buddhist Centre hosted the Vice President of Uganda His Excellency Edward Kiwanuka Ssekandi on Saturday April 6, 2019 to celebrate the 5th international Buddhist Day. This was the first time for the Centre to host such a prominent leader in the country.

Bhante Buddharakkhita called upon the Ugandan government to assist the Buddhist community to extend its humanitarian services in rural areas such as providing safe and clean water, education and livelihood support to rural communities throughout Uganda.

In his speech, the Vice President pressed upon reflection on Buddhist values especially on the conservation of the natural environment. “26 centuries ago, the Buddha asked his followers to not only protect mankind but also protect animals and vegetation”, he said.

Ssekandi assured the Buddhist community that the government of Uganda is committed to environmental conservation and “will continue to enforce policies and regulations that ensure that the country’s forest cover and the rich natural diverse environment endowment is protected for sustainable development.”

The Vice President later in the afternoon joined a 20 member delegation led by Bhante Buddharakkhita to Japan to participate in the 5th International Buddhist Day celebrations as a Chief Guest.

While addressing the Supreme Buddhist leaders in Japan from five continents, the Vice President said that there cannot be meaningful sustainable development without the freedom of individuals to think and act, and this freedom can be guaranteed through peace and tolerance. He applauded the world Buddhist leaders for promoting peace and harmony and extended his invitation to Buddhist leaders to come to Uganda to see the beauty and of the country. Furthermore, he suggested the future World Buddhist Summit should be held in Uganda. He assured them that Uganda is safe and peaceful and will continue to promote freedom of worship for all its citizens.

He emphasized peace as the central pillar of Buddhism and the need for a peaceful co-existence as the component in the socio-economic transformation and development of a society. In his official speech, he conveyed a message of the president of Uganda to the World Buddhist Summit that wished the Summit a grand success and prosperity.

The Vice President attended a press conference where he expressed his gratitude to the World Buddhist Summit for inviting him and his delegations.

As part of the tour, the Vice president visited Hiroshima and offered a flower and wrote a prayer of peace for the victims of A-bomb. He spent his last night at a Seaside Guest House in Okayama.

Most Ven. Bhikkhu Buddharakkhita who led the delegation had just landed two days ago from Hawaii, USA. He travelled with one assistant Mr. Joe Kivumbi Busirike and two journalists from the leading television in Uganda. Bhante was offered a proclamation by the World Buddhist Summit as an outstanding Buddhist leader working tireless to spread Buddhism for the benefit and well-being of all. 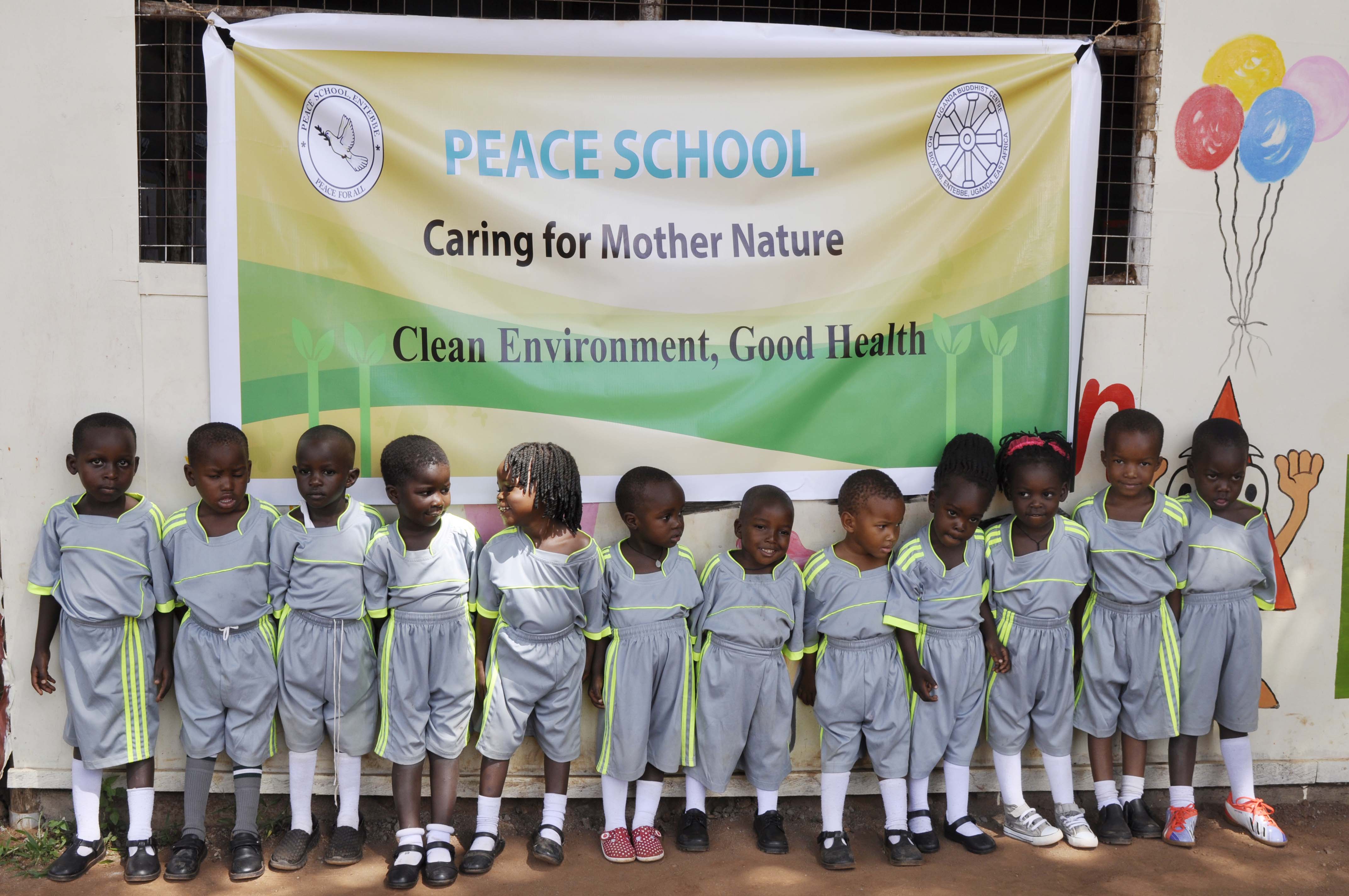 In this 21st century, our environment is at a great threat and facing inordinate challenges of rapid changes. We are faced with climate changes. In our community for example, we have had a few rain showers since the year began which is unlike before, in seasons of the year like this one, we usually experience heavy rains. We believe these sudden changes are mainly due to the rapid aggressive human actions to the environment such as deforestation.

As Peace School, we are committing to taking an active participation in environmental protection and we will encourage every child to plant trees to enhance greenery and purity of the environment from pollutions.

During this campaign, children participated in cleaning and planted a mango tree at the temple, of which they will enjoy the fruits of their action in the nearby times. 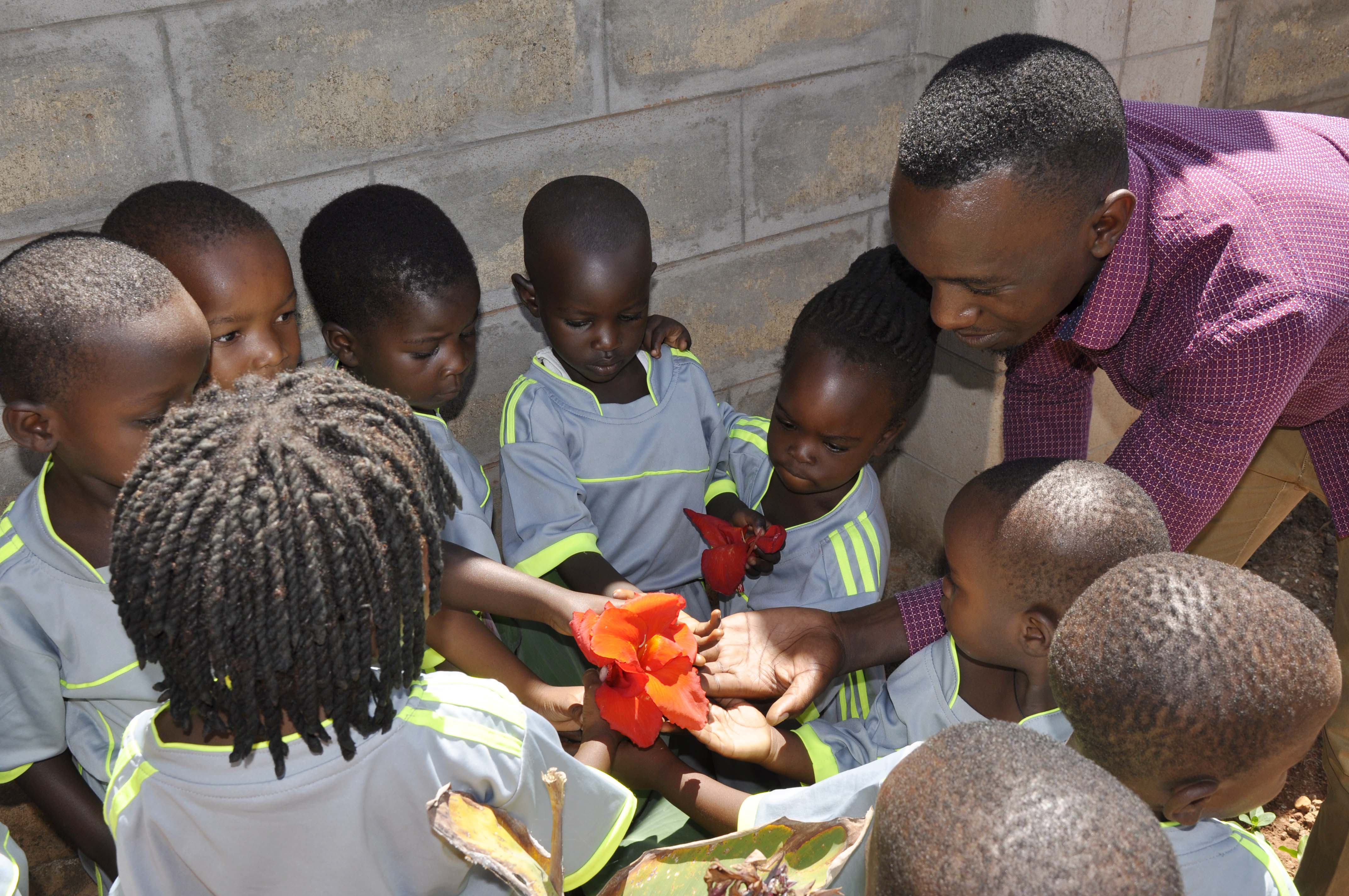 We are in the second month since we started to operate our preschool, providing high quality education to children in our community. This commitment to give high quality education is demonstrated through our focus on areas of child development with highly trained teachers. The teachers with their enormous experience in early childhood development use effective teaching and assessment approaches as well as establishing collective relationships with parents and the whole community.

As a school based on the Buddhist foundation, we are striving to empower children to realize their full potential guided by principals of compassion, generosity and loving kindness.

Each day brings hope for a better generation to come. The day’s activities include a balance of active time, quiet time with teacher-guided activities as well as child-initiated activities. Children have the opportunity to learn as they engage in a variety of learning areas and activities guided by the national curriculum.

All the students are fully sponsored by the Uganda Buddhist Centre through the support of the various stake holders to ensure that the children have access to best education even with the available resources. 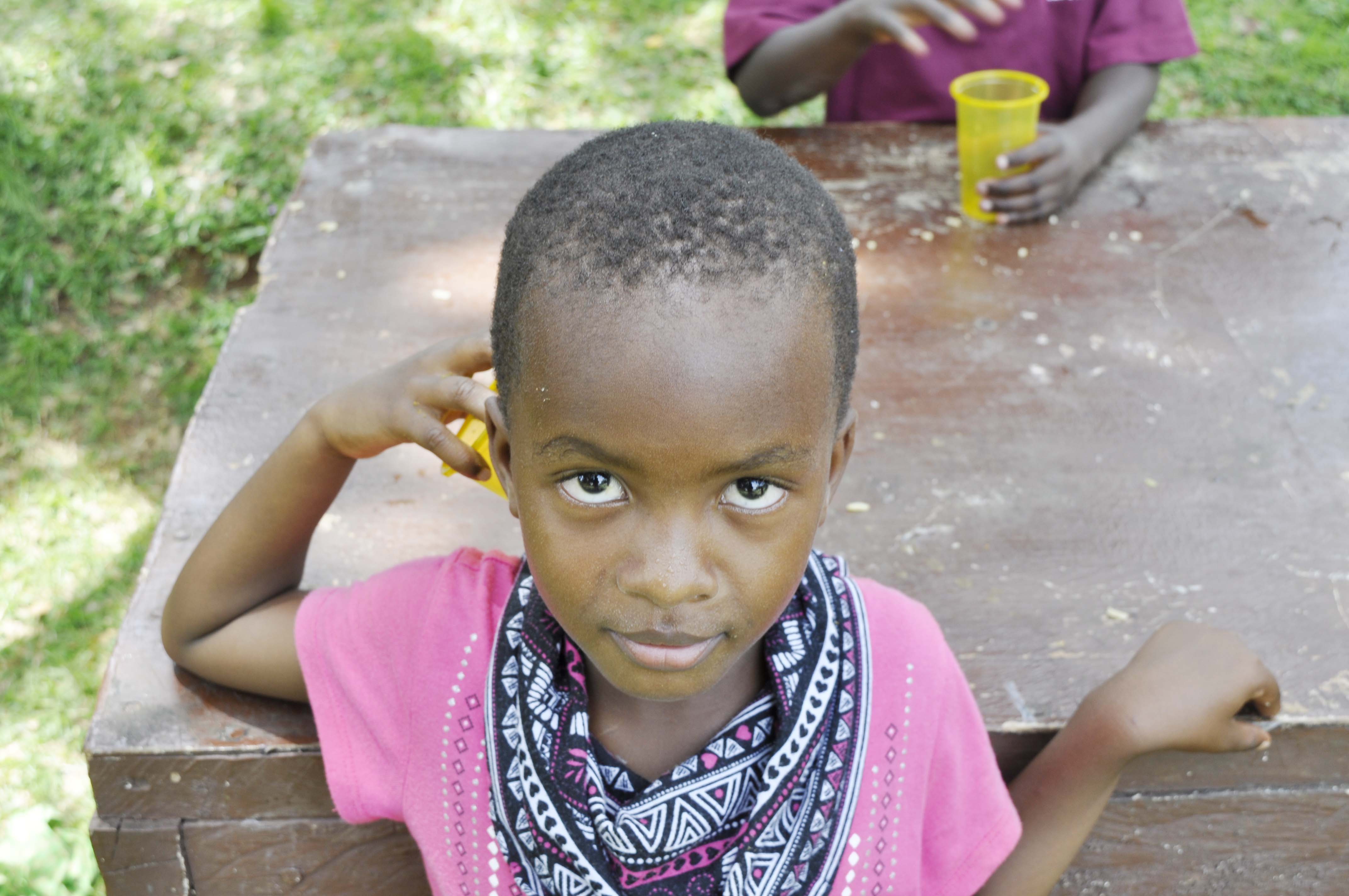 We work to meet the physical and spiritual needs of people in our community through the hunger relief program, which includes nutritious feeding of children, provision of meals for orphans and sharing food with families in our neighborhood.

With support from our friends and supporters, we fed over 150 children in this month. We also distributed food to some families in our neighborhood. The food came from our own garden. A couple of months ago we announced about our hunger relief program with the aim of ensuring food security, distribution of food to children and families that are hungry. This can only be sustainable by growing our own food. We acquired two acres of land, where we now cultivate a variety food. We use it for our own consumption and the rest we distribute amongst people in our neighborhood. We also encourage people to be self-reliant. 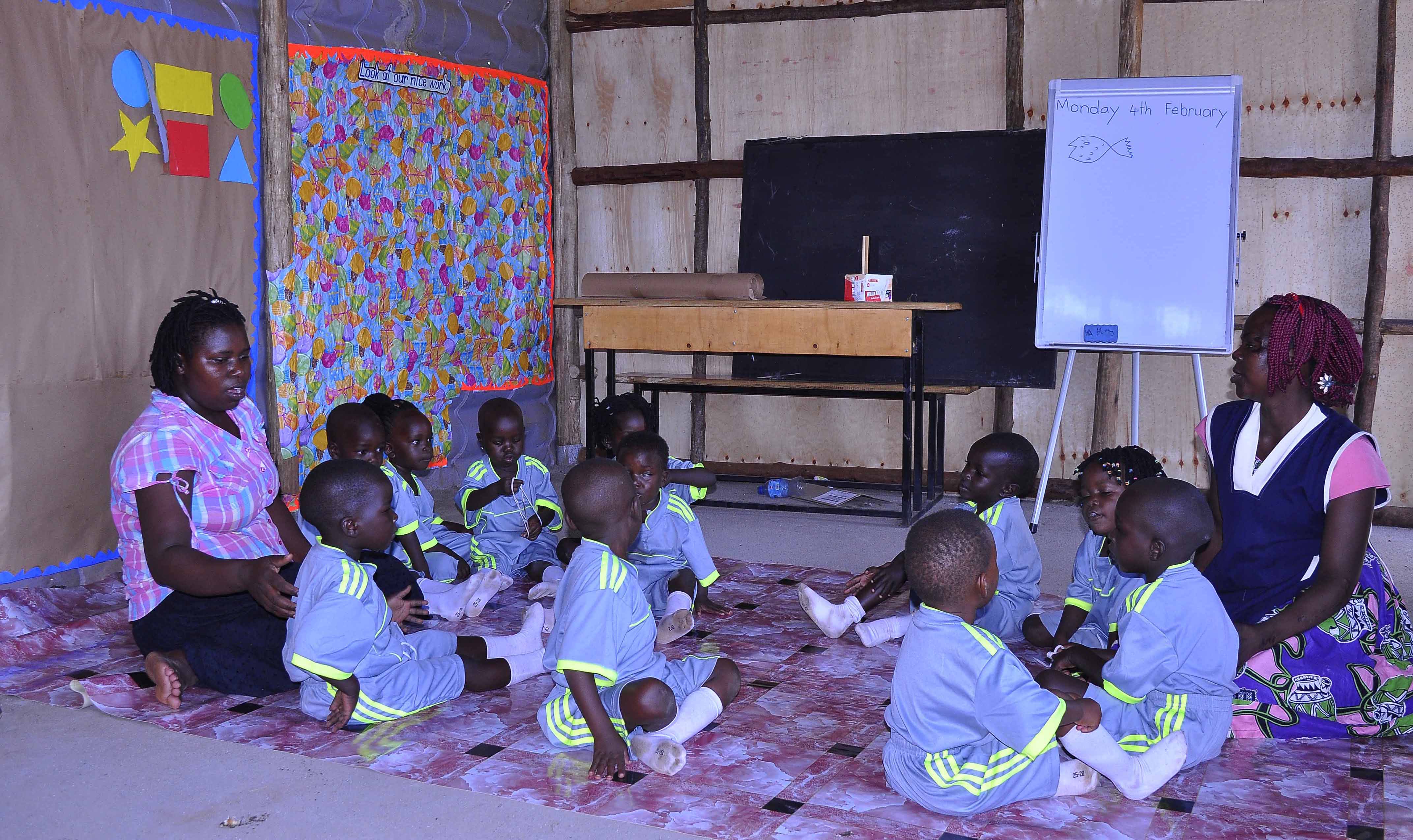 In 2018, you took actions to support and promote Bhante Buddharakkhita’s initiatives in Uganda, Africa. These initiatives included the spread of Buddhism in Uganda, promotion of better public health practices, support women and youth entrepreneurs, and supported children in their schools. Let’s not stop here – let’s create more impact and memories in 2019.

A few months ago, we renewed our focus towards education and we have started a preschool with the goal of providing high quality education to the children in Bulega village, in Entebbe. Due to the limited resources, we have decided to begin with 12 children between the ages of 3-6years to nurture and monitor them from the ground up. We are basing our nurturing on the national teaching framework with a blend of Buddhist values.  Values such as wisdom, giving, compassion can only be nurtured from early life—and as these children grow up, they learn to appreciate other cultures and model creativity for their success in life.  Most of these children are from under-resourced families, and our commitment is to allow them have access to education.

What can you do?

There is a lot we can achieve together—opening doors to education for these young children. You can sponsor a child, sponsor a teacher, or help in the construction of a safe learning environment for children. 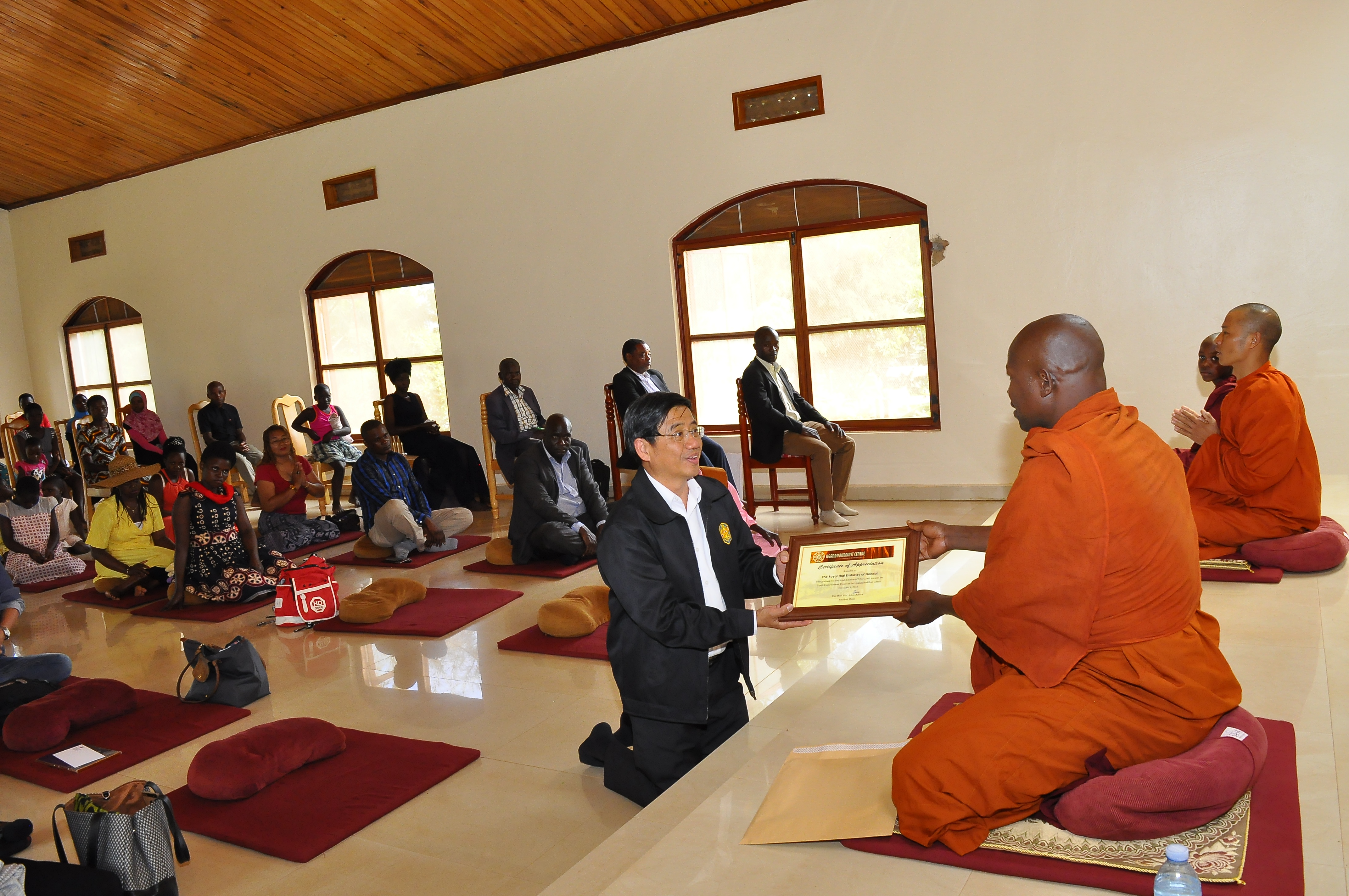 The Thai Ambassador to Kenya H.E Cherdkriat together with a team from the Royal Thai Consulate in Kampala visited UBC on December 6, 2018. The visit is part of their annual program to support the propagation of Buddhism and strengthening of Thai community in Uganda.

The day’s activities included taking five precepts, chanting, Dhamma talk on Metta (loving-kindness) and practice of metta meditation delivered by the resident monks; presentation on the progress of the Women Empowerment project (WEP). The ambassador was offered a certificate of appreciation for their support and the women empowerment group also offered sweaters (as part of their products) to express their gratitude to the embassy. It should be noted that the Royal Thai Embassy of Nairobi is the exclusive sponsor of the Women Empowerment Project and Youths Empowerment Project at the Uganda Buddhist Centre.

In his short speech, the ambassador expressed his humility to UBC’s efforts of impacting communities and assured continued support to the temple. 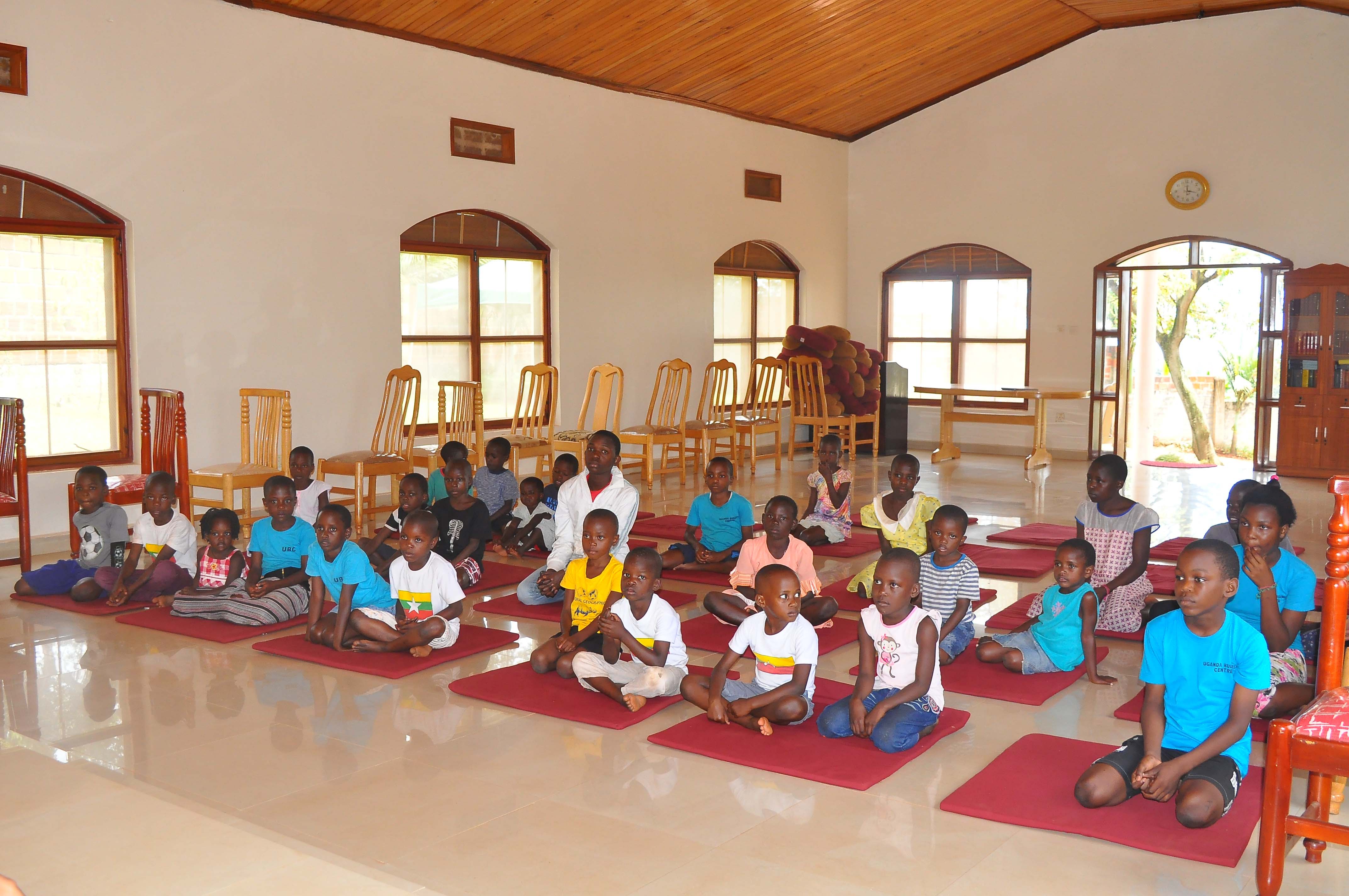 At the Uganda Buddhist Centre, we understand that education is the key to sustainable communities. This is why at the core of our programs, we place focus and passion to opening doors to education for children in the neighboring communities. Our goal here is to promote child education.

As schools move towards the end of the third term, most children are out of scholastic materials. With support from Ven. Adicca (our resident monk) and Ms. Moe Moe (lay supporter, who offers food to children monthly), we distributed various scholastic needs so that children can stay in school to complete their term. These included dozens of exercise books, pens, pencils, rulers and erasers to a group of 50 school-going children from Bulega village.

Children also had a moment of mindfulness meditation and took refuge in the Triple Gem (Buddha, Dhamma and Sangha). 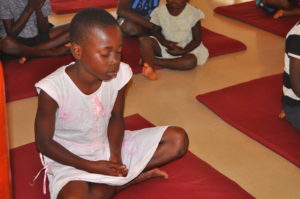