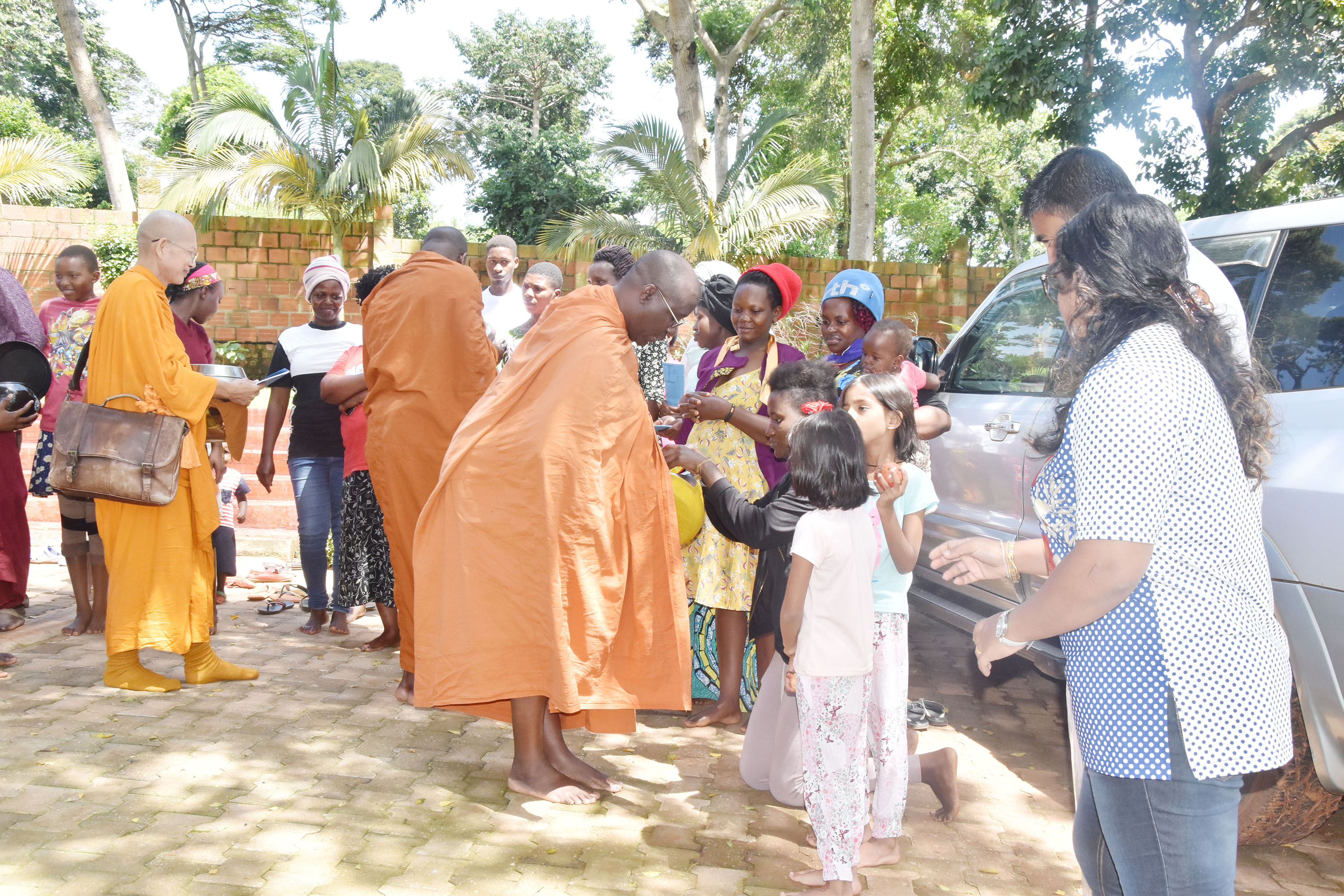 The word Kathina is a Pali term which refers to a wooden frame used to make robes during Buddha’s time. The Kathina ceremony is a special event that bring together monastics and laities to share and reflect on the Dhamma. The ceremony happens in October after the three rains retreat (Vassa). It is also celebrated to show a mutually interdependent relationship between monastics and laities, where lay people abundantly cultivate merits and joy through generosity.

This year was the first time kathina is celebrated at the Uganda Buddhist Centre. The pre-Kathina ceremony was on October 13 and it included Bhante Buddharakkhita delivering a speech on the significance of Kathina ceremony and offering of food to over 80 children and gifts to over 20 women from the local village by Ms. Moe Moe.

The Sri Lankan community led by Mr. Kamal and his friends also donated food items to the temple.

The second kathina ceremony was on October 27th. The event opened with a one-hour meditation and Ven. Justin from Cambodia gave a talk on his mission to Uganda, a talk that inspired many of his listeners. He emphasized that he was sent by his teacher Most Venerable Abbot Mahanoeun Yin of Santa Ana Monastery (also Founder/President of Khmer Buddhist Relief Association) to bring alms (dana), and strengthen Buddhism in Uganda. His coming to Uganda laid a firm foundation for the establishment of Uganda-Cambodia Buddhist friendship. 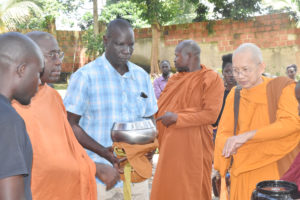 On the same celebration, Bhante emphasized the significance of Kathina as a day of alms-giving to the Sangha and getting together which is also a practice in the African traditional culture. He also demonstrated to the local people on the Buddhist culture of Pindapata, where lay people lined up to offer alms to the monastics.

In the afternoon, Venerable Justin presented the robes that he had carried all the way from Cambodia. The robes were offered by his followers from Cambodia and he offered to the temple on their behalf. He further offered scholastic items and T-shirts to over 150 children from the village. He also generously offered school supplies to the Peace School. 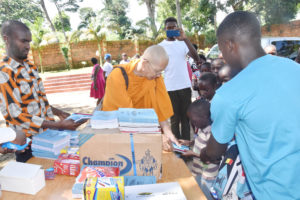 This year’s kathina ceremony was a milestone in the history, growth and development of Buddhism in Uganda. In fact, Mr. Gihan De Silva and his family (Sri Lankan living in Uganda) requested and booked as the main kathina celebrant of 2020. He will offer robes to the monastics.

The team at the Uganda Buddhist Centre would like to express their gratitude and joy to venerable Justin for his generous heart. Your Venerable, so many people want to come support Dhamma in Africa, but you have taken the courage to come to Africa.

Venerable Justin narrates his experiences in Uganda during his recent visit to the Uganda Buddhist Centre.

“Thus, as a Buddhist Devotee, never in a million years did I think that I would actually be in Uganda as a Cambodian-American Buddhist Monk!

Buddhism was unascertained in Uganda until a fully ordained Ugandan Monk (Bhikkhu), whose birth name was Steven Kaboggoza (ordained name is Buddharakkhita), introduced to Kawempe, Kampala, Uganda, on April 10, 2005; thus that was where the inception of Uganda Buddhist Center started. In 2006, Most Venerable Abbot Buddharakkhita relocated Uganda Buddhist Centre to Bulega Mbilu Village (Garuga, Katabi Subcounty, Busiro County, Wakiso District, Entebbe), where a Meditation Hall was constructed.  Presently, Uganda Buddhist Center is located in Bulega Mbiru Village (Garuga), approximately 6 Km off Entebbe-Kampala main road. However, the Uganda Buddhist Centre was not established with a consecrated boundary to be formally declared of the eight stones blessings, which is known as Sima (Sīmā), until 2016; the centre was not officially inaugurated to be called a monastery after the Eight-Stones Blessings Ceremony.

On October 18, 2019, at approximately 12:50 PM, the plane had landed in the Entebbe International Airport; the overwhelmed feelings were strongly amassed beyond one’s imagination. Thus, I had arrived in a country, Uganda, where I knew no one and not a thing about it, except the perilous aspects of politics and wild animals. At the window of getting my visa fee remunerated, a young man asked me, with his intimidated voice, “What business do you have in Uganda??! Where will you be staying?!

How long are you staying in Uganda??!”. The questions were not difficult to respond, but his intimidated voice worried me a bit; and yet I revealed no intimidations to him! Nevertheless, to make a long story short, as soon as I responded to one of his questions, I will be staying at Uganda Buddhist Centre; the young man seemed to be congenial to my presence. As I was exiting to meet Kivumbi Andrew Mukomazi, whom I had been communicated on messenger for several months before my pilgrimage, the menacing feelings seemed to be alleviated. In addition, on the way to Uganda Buddhist Centre, even more so, Andrew was able to make me feel safe by his affability; thus I realized that for the next two weeks of my stay in Uganda will be safe!

As Most Venerable Abbot Buddharakkhita has planted the Seeds of Dhamma in Bulega-Mbiru Village since 2005, many assistances to disseminate Buddhism in Uganda are still needed! According to Most Venerable Abbot Buddharakkhita, there are only about 45 local Buddhists but including Burmese, Chinese, Indians, Sri Lankans and Thais, the summation of Buddhists is approximately 400; that is practically nothing compared to the total number of population in Uganda (from World Population Review 2019, the population in Uganda is 44,774,854; approximately 44.27 millions). The majority of Ugandans believe in Christianity, which means that they are very unaccustomed to Buddhism; and with my personal experiences, some Ugandans think that Buddhism is a parasite. On October 30, 2019, while I had another opportunity to be in Kampala, I realized that the majority of Ugandans scrutinized me strangely; they did not even know that monks exist.

Nonetheless, whilst traffic was moving very slowly, we encountered a man with a book (Holy Bible), who was preaching about the scripture at the roadside, shouted at me “You go to hell …!”; Andrew and I turned to look at each other and smiled. We were practically speechless for his uneducated knowledge about Buddhism. However, due to the fact that they were busy with their quotidian lifestyle, some Ugandans couldn’t care less of my presence. Thus, I must dispense the elucidation of the term ‘Buddhism’! Buddhism is not a parasite as some Ugandans think; there are two languages in the term ‘Buddhism’ (Buddh + ism). ‘Buddh’ is the Pali language which derives from the term ‘Buddha’. In English, the term ‘Buddha’ means ‘the Awakened One, the Ultimate One, One who has fully attained enlightenment, or One who knows all’; the closest English translated terminology which I have selected for the term ‘Buddh’ is the word ‘awakening’. The term ‘ism’ is a ‘noun’ which has several meanings, such as ‘a distinctive doctrine, cause, or theory; a distinctive practice, system or philosophy, typically…; the system of beliefs’. Furthermore, the term ‘ism’ can be a ‘suffix’ which is used at the end of a word to form a ‘noun’, such as the terms capitalism, socialism, baptism, alcoholism, racism, Anglicanism, etc… With the combination of the two meanings (a distinctive practice and awakening), in my personal opinion, the term ‘Buddhism’ means ‘a distinctive practice to awakening’.

As for the perilous feelings that I had before I arrived in Uganda, were dissipated after a couple days of staying at Uganda Buddhist Centre. Thus, the experience which I had between October 18, 2019 through October 31, 2019 in Uganda was beyond my expectation. The hospitality from Most Venerable Abbot Buddharakkhita, Bhikkhu Sangharakkhita, Samaneras and the employees was far off than what I had imagined. The nostalgic remembrance which I will never forget. My profound gratitude to Uganda Buddhist Centre, Most Venerable Abbot Buddharakkhita and his staff!”

Sources: Uganda Buddhist Centre; The Most Venerable Abbot Buddharakkhita; The Elucidation of the Term ‘Buddhism’; The Pilgrimage from The Motherland to East Africa: The Interconnection of Buddhism Between Cambodia to Uganda; World Population Review 2019; Wikipedia, The Free Encyclopaedia.