Back To Home
Newsroom Sep 9 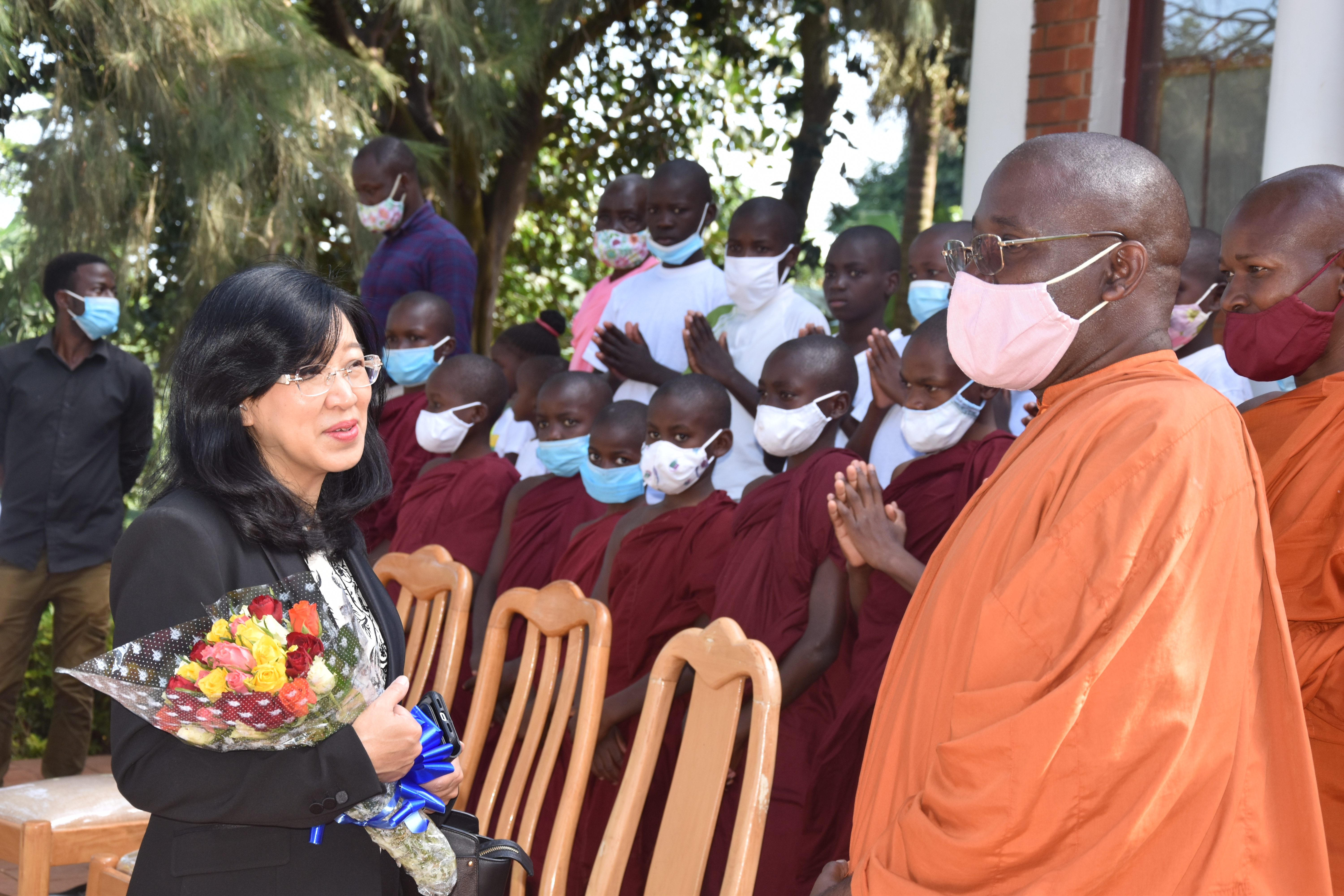 On August 24th 2020, the Ambassador of Thailand to Kenya, Her Excellency Sasirit Tangulrat together with Hon. Barbara Mulwana the Honorary Consul of the Royal Thai Embassy in Kampala visited the Uganda Buddhist Centre.

Initially, the Royal Thai Embassy requested the monks at the Temple to conduct a Buddhist ceremony for a deceased Thai national, the late Mr. Chamnan Chanu. The Ambassador and her team came to participate in this ceremony.

The monastics led by Bhante Buddharakkhita together with the Mayor of Katabi Town Council, Mr. Ronald Kalema welcomed the entourage at 4 p.m. The Ambassador was offered a flower bouquet by Travis Kalyango one of the Anagarikas at the Temple.

Bhante thanked the Ambassador for visiting the Temple and for the continued support of the Thai Embassy in Nairobi extended to the Uganda Buddhist Centre. The Embassy has supported UBC’s Women and youth economic empowerment projects in 2018 and 2019. Moreover, Bhante expressed his gratitude to the Royal Thai Consulate in Kampala for the support extended since the inception of the Uganda Buddhist Centre in 2005.

In her remarks, the Ambassador expressed her joy to see a Buddhist Temple in Uganda, and commended Venerable Bhante Buddharakkhita for bringing Buddhism to his home country.

“I am so happy that Buddhism has travelled far away from Asia to Africa. Actually, Buddhism has a played a very important role in the Thai society. Buddhism is not only a religion, but also a way of life. It is a way that teaches us how to work and walk the path to liberation. I believe that the Uganda Buddhist Centre will serve Uganda and the Thai community here the same way the Thai Temples do in Thailand. I want to assure you that the Royal Thai Embassy in Nairobi and the Royal Thai Consulate in Uganda will give support to the spread of Buddhism in Uganda. [Furthermore] I am very happy to hear that Hon. Barbara Mulwana the Honorary Consul who is part of the Royal Thai Embassy in Nairobi has continually supported the Uganda Buddhist Centre.

My intention is to promote relations between Uganda and Thailand. Initially, the priority is to promote economic cooperation, trade and investment. Today, Uganda Buddhist Centre can play a big role to connect the Ugandan people to the Thai people through Buddhism. Thank you so much Venerable Bhikkhu Buddharakkhita.”

After the monastic chanting and blessings, the Ambassador Sasirit Tangulrat was led by Bhante to plant an avocado tree.

Bhante asked Hon. Barbara Mulwana to water a palm tree which was planted by her late father, the late Hon. James Mulwana the former Honorary Consul of the Royal Thai Consulate in Kampala.

Bhante also asked the Mayor to water his avocado tree he planted during his recent visit.